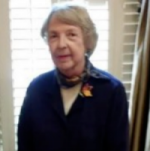 I have been a Reiki Master for several years after studying with Dian Peters and have consistently served with the TCSL team in offering Reiki to the congregants during our regular schedule.  This has been valuable in my own growth as my ability to sense energy and become an open vessel after the attunements at each of the levels.  Additionally, I am a licensed Science of Mind practitioner after several years of classes.  A friend gave me This Thing Called You in 1978 and I found the writings of Ernest Holmes to be so insightful that I pursued learning more as each opportunity arose.  The classes with the associated discussions, exercises and guidance gave me insight in applying the SOM principles in my own life.  It has been an honor to be able to offer both affirmative prayer and direct and remote Reiki to so many others over the years.  I am most grateful for this opportunity.

Your ticket for the: Aloma Sibley